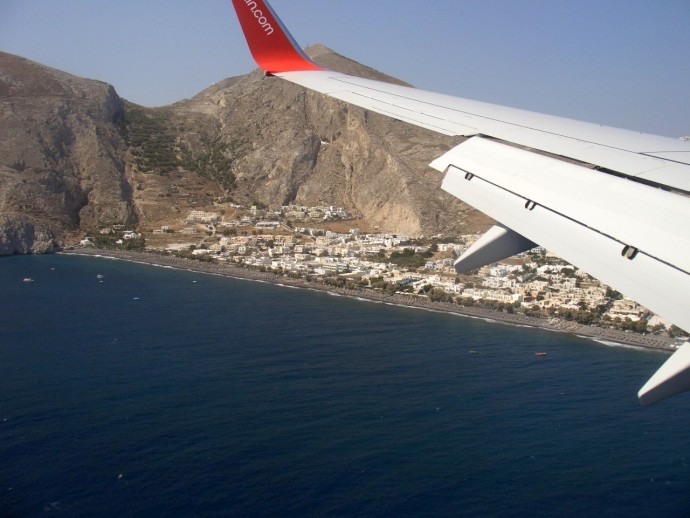 Flights from Germany to Santorini

Flights to Santorini are offered by several airlines from Germany and Europe, as Santorini / Thria Airport (JTR) is an International Airport.

From Germany Santorini / Thira is served directly by the following airlines:

Domestic connections e.g. from Athens to Santorini are offered by Olympic Air, Aegean Airlines and other airlines. You can book these flights for example at:

For direct flights to Santorini, for example, you have to plan 3:20 hours flight time from Cologne and 2:50 hours from Stuttgart.

The flight to Santorini: Direct or with a stopover?

When planning a vacation, one is often faced with the question of which connection is the cheapest. Only a few airlines (see above) offer direct flights from Germany to Santorini. Condor offers flights for less than 100 euros one-way, depending on departure time and place. Compared to flights via Athens, you can often save 50 to 100 euros each way. In addition, the travel time is shorter. This is not even three hours on the direct route, which is much shorter than the travel time, for example, via Athens, where you can quickly be on the road as a flyer even more than ten hours.

The disadvantage of direct flights, however, is that they fly comparatively infrequently, which means that as a vacationer you may not be able to book a flight on the desired date. Overall, however, the advantages of direct flights outweigh the disadvantages, as they usually save money and time. The longer flights including the changes, e.g. Athens, should only be used by those who are less flexible in their vacation planning and need a flight on a specific day on which no direct flight is available. A direct flight to Santorini can be booked with some airlines (see above), there you will also get information about the departure airports.

Indirect flights to Santorini via Athens

First you fly to Athens and from there you take a connecting flight to Santorini. Most flights from Athens to Santorini are operated by Aegean Airlines and Olympic Air. However, there are also flights to Santorini with Ryanair and Skyexpress. The flights take a little longer than direct flights. The flight time to Thira including connecting time in Athens is, for example, from Düsseldorf in the very favorable case at about 4:30 hours.

Tip: Information about the airport can be found on the subpage Santorini Airport.